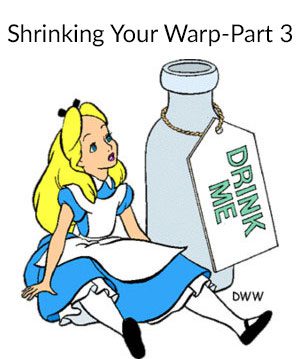 As we talked about in the first two parts of this shrinking your warp series, some warps are straight forward: the repeat is regular and not too big, plus the stripes or colors are regular or nonexistent.  Easy-peasy to shrink them down.

Some drafts are more complicated, but the same tools are all it takes to make your project fit the loom at hand.  We recently dealt with this while developing a new summer napkin using the new Tubular Spectrum Tints and Tones with the classic Spectrum colors.  The napkin idea is based on the original Tubular Spectrum Towel kit.  That towel has 19 colors on a white base and is 23.5” wide in the reed.

This new napkin uses 5 colors to make stripes on a white background and is the same width as the original. This is the first draft for the new version:

OK, Fabulous.  But we want to weave it on a Wolf Pup 4 Harness Loom, which is only 18” wide.  However, we cannot just remove some rosepath repeats because the overall stripe color sequence is not regular.  What to do?  We can figure out how to make it narrower if we go back to the basics.  Step 1…How many threads are in the original draft and Step 2…How many threads can you have in the new draft. It all starts there.

The original instructions have 565 ends (see the draft above).

There are two different approaches for how to reduce the pattern by 133 ends:  (1) keep the number of colored stripes the same and swap the structure for a something that uses fewer ends, or (2) eliminate some of the stripes.

Keep the stripes the same and swap the structure for a something that uses fewer ends.  The new warp is 75% as wide as the old warp, so if we eliminate approximately every fourth thread, we reach the new # of ends while maintaining the look of the original draft.

This will give a lovely plain weave version of the original draft.  See the following draft showing plain weave on a 4 shaft straight twill threading.  The drawdown shows a plaid pattern created by weaving the weft colors in same order and number of threads as the warp colors.  416 ends which is evenly divisible by 4 (the number of ends in the threading repeat), 17.3″ wide in the reed.  By the way, wolf pup looms come with 100 heddles per harness, but you can add more to each harness to accommodate wider patterns.  Check availability of extra heddles here.

This is a small snip of the draft to show the threading, tieup and treadling closeup.  The weft is shown as blue only to make the pattern visible in this small piece.

To reduce the stripes overall, the number of stripes gets cut down to 3,2,3,2,3.  This feels interesting, and retains the overall look of the draft without being so busy.  Here is the reduced draft with Rosepath threading and treadling.  395 ends overall, approximately 16.5″ wide in the reed.

Here is a closeup of this pattern.  Again the weft is shown in blue so you can see the pattern.

We like the draft so much, we made this pattern into a set of instructions to make a set of 4 napkins.  If you would like your very own copy of the instructions, click here.  We are going to weave a set or two for a summer picnic.  Where ever we might be having that picnic this year…even if it is in our own backyard!

Any way you cut it, now you are in control of the size of your project from any draft!