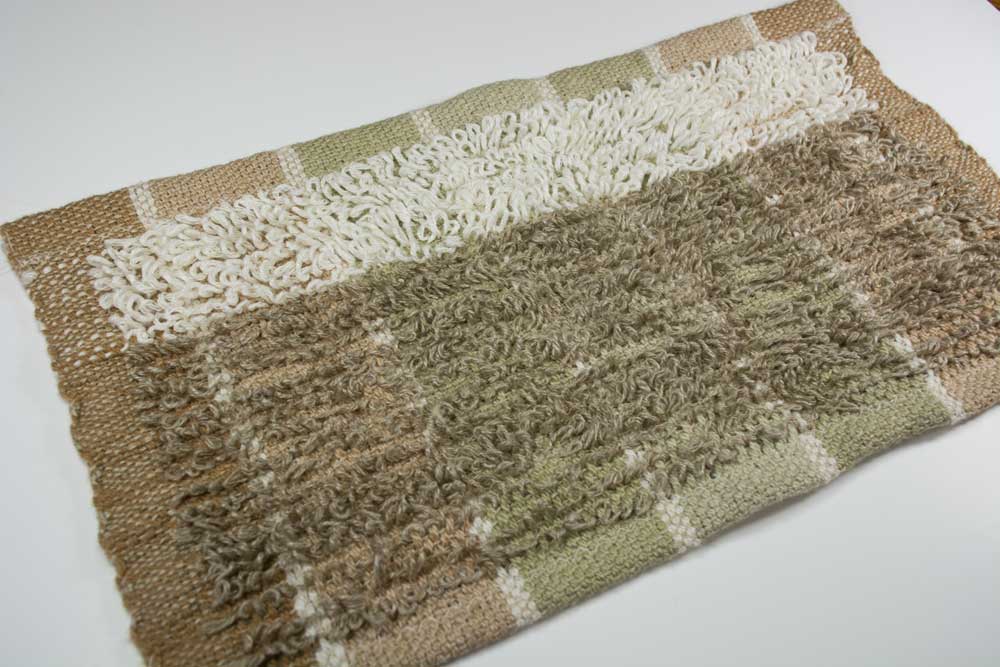 The other day a local weaver came by, and as we were chatting, she mentioned that she was weaving a “Spockloth”.  A what?  My mind snapped to this unknown word, and started searching around trying to figure out what she said and what on earth she had been weaving so I didn’t seem so ignorant.  So, stalling for time, I asked her to repeat it, figuring that I had misheard and all would be enlightened on the second time around.  Unfortunately, my brain again heard the same word…”Spockloth” .  Now I can be a real absent minded professor sometimes (after all, I was a biologist in a previous epoch of my life) and am not always in touch with hot new trends, so I figured I was missing something and the conversation passed onto other things.

Later that day, we were talking about weaving, and Carol mentioned the “Spa cloth” that the weaver had been making.  All of a sudden, I realized what I had heard before was not a “Spockloth” but indeed, a “Spa cloth”.  I felt ever so much better, if not a bit foolish, for making the mistake the first time around.  I must say, I had visions of something that a certain someone aboard the starship Enterprise might use on the first attempts through my mind to understand the word.  Sometimes my inner geek gets the best of me!  Happily, thoughts of the “Spa cloth” were now settled in my brain, and I again moved onto other tasks.

2 nights later as I was finishing up the last towel on the rigid heddle American Maid Sampler Towels, I had a little bit of warp left over.  I always like to use those ends of the warp for sampling, and the “Spockloth” incident came back to me. I remembered that several years ago Syne Mitchell made some Spa Cloths with loop pile, and I thought this might be a fun way to use up the end of the warp. What if I made a cloth with loops of hemp yarn?  I love the feel of fabrics that blend cotton and hemp, and I wondered how soft the loops of hemp would be once the cloth was woven up.  I have never woven loop pile before, but we have talked about doing it for years with the hemp yarn.  So this seemed like a perfect way to answer several questions at once.  Sampling!

With the thought of Syne Mitchell already in my brain, and the fact that we just saw her at CNCH in Modesto, I remembered her new rigid heddle book and figured she must have directions to make loop pile in there.  I grabbed my electronic tablet and checked in her book “Inventive Weaving on a Little Loom: Discover the Full Potential of the Rigid-Heddle Loom, for Beginners and Beyond”.  This is a lovely book with fun, inventive projects in it.  Guess what one of the projects is?  Yes, a Spa Cloth woven with loop pile and hemp yarn.  What a coincidence!

Our hemp yarn is different than the hemp yarn that Syne uses, but it would be a great way to experiment.  I had the warp with 8/2 cotton yarn doubled and sett in a 10 dent reed.  I wove the hemp and tabby on the the spa cloth with 2 ply hemp yarn in natural, and then I used 3 ply natural and 6 ply bleached hemp for the weft loops.

Weaving these cloths is time consuming.  Pulling up loops between every other warp thread takes time, but a crochet hook makes the process go a lot faster, and making sure not to pull the loops tight around the dowel is another time saving hint.  It took several hours to do my sample, but I did learn a lot in that time.  When you have woven several rows, the fabric looks like Brillo as the hemp sticks up in very neat rows.  However, once they are washed, they soften and have a nice texture.

The 2 ply hemp as tabby in between the loop pics worked well, and 3 or 4 shots of the 2 ply yarn was a nice amount to secure the loops and gave enough distance between the loops.  I didn’t pack the first couple rows that I wove tightly enough, and the hemp loops have shifted toward the back with washing.  I found by weaving two rows and then pulling out the dowel and then packing a bit more made the loops stay in place nicely.  The bleached 6 ply hemp yarn made the best loops and created a nice fabric after washing, the 3 ply hemp yarn was a bit skimpy.

When I weave more “Spa cloths” for my crew, I will use the 6 ply hemp for the loops, and use the 2 ply hemp for the tabby in between the loop rows.  Overall, I was happy with the experiment, and will have to try doing it again.  However, I still can’t say or type “Spa Cloth” without laughing and saying “Spockloth” to myself!

Any cookies that may not be particularly necessary for the website to function and is used specifically to collect user personal data via analytics, ads, other embedded contents are termed as non-necessary cookies. It is mandatory to procure user consent prior to running these cookies on your website.

SAVE & ACCEPT
×
Scroll to Top