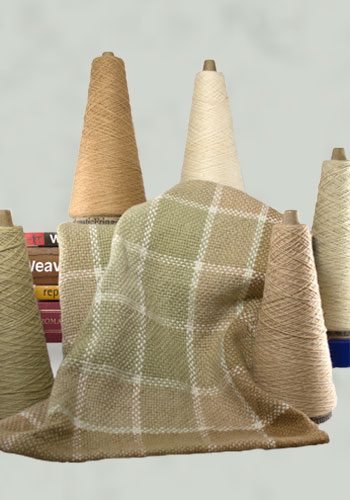 American Maid™ Yarns, which we use for our American Maid Sampler Kit, get their color from the cotton plant’s genes rather than from the dyepot.  The yarns made from this lint are unique because the colors get darker over time rather than fading.  Additionally, with a couple tablespoons of baking soda in a sink full of hot water, the colors darken and show their true colors.

For the past 5 or so years, we have created green, brown and white yarns from sustainably grown cotton lint, in 3/2, 8/2, 10/2 and a 4 ply.  We have a dark and light brown (light brown made by blending brown lint with natural white lint), a dark and light green (light green made by blending green lint with natural white lint), and the white lint spun into its own beautifully creamy, natural white color.  Check out our sampler kit of these yarns:  1.5 oz cones of each of 5 colors of yarn in all the sizes of yarn that we have available.

I set out on a journey to figure out what to weave with the amount of yarn in an American Maid™ sampler kit.  I turned first to the rigid heddle loom.  I had never woven on these looms until 2015, and have been pleasantly surprised by what these little looms have to offer.  The first benefit is very little loom waste.  Perfect for samplers…we all hate to look at the thrums from the floor loom and wonder what to do with them. Granted, you can’t put on a 14 yard warp onto a rigid heddle loom, but you can put on enough yarn for 2 towels or 4 napkins, and you can do it quickly and even with your kids or cats interrupting you the task doesn’t take long.

Using the yarn from an 8/2 sampler kit, I warped up 85″ on the 15″ Schacht Cricket Loom with stripes of the dark brown, dark green, light brown, light green all separated by natural white, using a 10 dent reed.  This would be enough warp for two towels or at least 3 napkins.  Because the 8/2 yarn is thin, I doubled it to get an overall sett of 10 doubled ends per inch.  Just right for an 8/2 yarn.  For the multi-harness weavers, you could sett it at 20, and use a basket weave tie up and treadling.  When you warp a rigid heddle loom using the direct warping method and you are doubling the threads, you simply go through both the slots and the holes with a loop during the warping process, so each doubled end is treated like one end during the warping and weaving process. No need to rethread half the threads!   I then just wound the warp onto the back beam, tied up to the front beam, and was ready to weave.  All in less than an hour!

Now the fun part began.  The weaving process.  The first go round on this project, I wove napkins…the first was woven in plain weave as a gamp (of course, where else do lunatics start but with a gamp?).  The hems were woven with single strands of the 8/2 cotton and the body of the napkin woven with the 8/2 yarn doubled to match the warp.  Beginning with the dark brown, then a white stripe, and proceeding through the warp colors in order, with the ambition of making the squares of color approximately square.  Then for the next napkin, I got out a pickup stick and Jane Patrick’s book “The Weaver’s Idea Book: Creative Cloth on a Rigid Heddle Loom”, and using the 3/1 lace pickup pattern with white for the weft, wove 15″ to make the napkin square overall.  The final napkin was woven again as a gamp and woven with a 5/1 pickup pattern.

Once the napkins were off the loom they had their very first bath in the sink with some soap, hot water from the tap and a couple tablespoons of baking soda. Wow, the water was really dirty…oh yeah, this was the yarn’s very first bath!  No water processing is involved in the yarn’s journey from the cotton field to the loom.  No wonder the wash water was dirty on the first trip through the bath, I was literally washing off the dust from the cotton fields.  However, by the time the napkins came out of the rinse water, the wash water was nice and clear!  Then a quick wrap up in a clean towel to squeeze out some of the excess water, and into a warm dryer for 20 minutes.  My oh my!  The colors have changed, and they are beautiful, soft and I would just like to roll around in the fabric.

The plain weave napkin shows the colors nicely, and the gamp effect makes a really nice napkin. Plain weave is a very sturdy fabric…great for napkins. The 3/1 lace on the second napkin creates a great texture for the cloth. Perhaps a bit thick for napkins…this would be a lovely towel.

The 5/1 lace is my least favorite:

The floats, especially the warp floats on the reverse side are too big for a napkin, in my opinion. I would probably get my fingers or a ring caught in them, at some time.  And I didn’t plan the floats to mesh with the color changes.  I would have to do some planning if I wanted to use that pattern for a plaid fabric.

I liked the fabric that came from the 3/1 lace pattern so much and thought the weight of the fabric would make perfect hand towels.    In an attempt to use as much of the yarn in the sampler kit without going over, I decided to make one towel a plaid, and weave one towel striped.  I would like to make a striped towel using only the white yarn for weft, but there isn’t quite enough yarn on the mini cone to accomplish that because each 1.5 oz cone of 8/2 cotton has about 300 yards on it, and with an 84″ warp with all the colors separated by white, I wouldn’t have quite enough white to do a full towel.  After spending a bit of time with a pencil, paper and my calculator, I figured I could do a mostly white towel with a border of light green on either side.  Plenty of yarn for that.  Hems again woven with single strand in plain weave to make the hems lie flat.  As soon as I started in with the doubled yarn for the body of the towel, I switched to the 3/1 lace pattern with the pick up stick.  In the end, I had plenty of warp to do two towels each about 25″ long, plus a little warp left over to make a spa cloth with hemp weft and hemp loops. 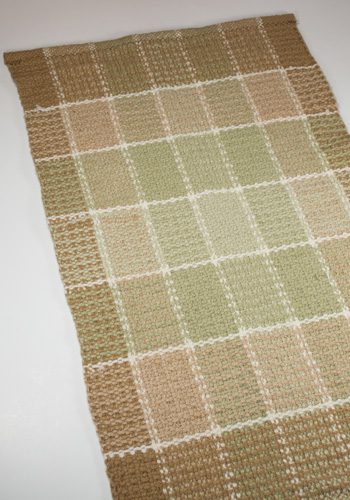 Same processing as before with the bath in the sink, baking soda and trip through the dryer.  These towels are fabulous.  Perfect hand towels with a wonderful texture.  Finished size on the towels about 12.25″x 21.5″.

Want instructions for these towels?  Click here to purchase a downloadable pdf of the instructions.

I am now working on what you can do with the sampler kit on a floor loom.  Off to big loom land!